Turkey bacon has lower fat content than pork bacon and is commonly marketed as an alternative to traditional pork bacon. This product is usually prepared from smoked, chopped and improved turkey.

Turkey is a popular choice for people who abstain from pork due to religious reasons and those who want slightly fewer calories on their food.

No matter what the reason you’re eating turkey bacon, you might have the question of whether you can eat it raw.

Can you eat turkey bacon raw?

Yes, you can eat turkey bacon raw because it is smoked. Turkey bacon is cured so it is okay to eat it raw. 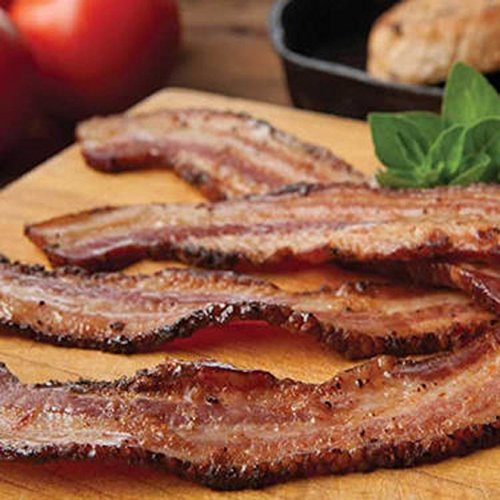 Is eating turkey bacon raw bad for me?

Turkey bacon is fast and easy to prepare. However, it has several potential downsides.

Turkey bacon contains a high content of sugars because manufacturers intentionally add more sugar to it to improve the taste and texture, making this food unideal for people who avoid sweet food.

In addition, it contains high sodium levels. Sodium is added at a high level to enhance the flavor of turkey bacon and it serves as a preservative.

Moreover, turkey bacon is processed food and any processed products can potentially increase the risk of heart disease and diabetes. So it is advisable to eat processed food in moderation.

What is turkey bacon?

Turkey bacon is used as a healthy alternative to pork bacon. It is also a popular choice for people who avoid pork.

What is the nutritional value of turkey bacon?

Turkey bacon has less saturated fat and fewer calories than pork bacon. Stil, it is processed food and consuming it in moderation is advisable.

What are the benefits of turkey bacon?

If you are on a weight loss journey then adding to turkey bacon is a good option. It has low or no carbohydrates at all.

Also, it contains fewer calories than pork bacon. So if you are regulating your fat intake, then this is a good inclusion to your diet. Moreover, this is a good choice for people who avoid pork for some reason.

What’s great about turkey bacon is that it is fast and easy to prepare. Just like pork bacon, you can pan-fry, bake or microwave it.

While the method of preparation is the same with pork bacon, they vary in taste and texture. Since turkey bacon has a lower fat content, it is not crispy as pork bacon.

Turkey bacon is usually cured and smoked before being sold. Meaning, it is already cooked and ready to eat, however, it is still best to check the packaging.

Can turkey bacon give you food poisoning?

Yes, if it has bacteria in it. Deli meats including salami, ham, bacon and hot dogs can be a source of food poisoning.

How do you know if turkey bacon is bad?

If turkey bacon’s color has changed from light pink to gray and it smells conspicuously sour, then it is most likely spoiled. Also, you might need to discard it slimy and sticky to touch.

Uncured means it does’t contain nitrates or nitrites, so no preservatives on it. So you need to cook it before consuming it.

How do you know if bacon is undercooked?

If it is still light pink then it is undercooked and if the color is too dark then it is overcooked.

When you cook bacon, it starts to darken and turns to a reddish brown color. Time to remove it from the pan if it is brown and the desired crispiness is achieved.

How long does raw turkey bacon last in the fridge?

After opening the packaging, a raw turkey bacon will remain safe to eat within seven to fourteen days if you keep it in the fridge. If you notice that there are some changes in the smell and color like it somehow turned gray, then it’s time to discard it.

Why is turkey bacon pink?

Turkey bacon is pink because of the presence of nitrites and nitrates. These chemicals are usually added to cured meats, like bacon and ham to make them pink.

How long should I cook turkey bacon?

You can cook turkey bacon in a skillet on medium heat for about 7 to 10 minutes while flipping them regularly.