Are you unsure if your buttercream needs to go in the fridge? Continue reading to find out why not. You will discover why it isn’t necessary to refrigerate buttercream right away below.

Does Buttercream Frosting Need to be Refrigerated?

Buttercream icing does not need to be refrigerated. Unless you’re working with German or French buttercream, that is. There are many varieties of buttercream. 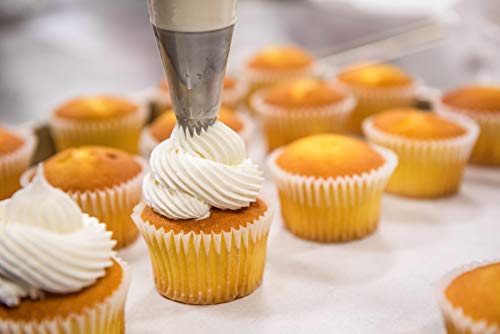 Buttercreams made in the United States, Swiss and Italy are all comparable. They include egg whites, though. They can remain at room temperature for a few days if needed. Pasteurized egg whites can be used instead of raw eggs if you’re concerned about salmonella in them.

American buttercream, by far, is the most popular choice because it is extremely creamy and delicious, with a fluffy and smooth texture. It’s made with butter, sugar, milk, and vanilla extract. Because of the high amount of sugar in American buttercream, it may be kept in a cold, dry location for extended periods of time.

How Long Does Buttercream Last in the Fridge?

You can keep your buttercream in the fridge for up to three days if you don’t intend on using it before then. Keeping it in an airtight container is once again important. Buttercream may be kept in the refrigerator for up to two weeks.

Allow the buttercream to thaw on the counter for at least 15 minutes before using it.

How Long Does Buttercream Frosting Last at Room Temperature?

Buttercreams made with American, Swiss or Italian are not required to be refrigerated right after being mixed. You can keep buttercream at room temperature for up to three days instead.

The buttercream should be kept in an airtight container. You don’t want your buttercream to dry up and acquire a flaky, difficult-to-spread texture as it might.

It’s also a good idea to avoid putting your buttercream near the heat, as this might cause it to melt and be difficult to manage. It may also contribute to the formation of bacteria.

How Long Does Buttercream Last in the Freezer?

You can freeze buttercream in most cases for extra weeks. Buttercream may be kept frozen for up to three months if properly covered and stored.

When you’re ready to use the buttercream, let it chill overnight in the fridge. After that, set it on the counter for about 15 to 30 minutes so it can return to its creamy and spreadable state once again.

Choosing the Best Buttercream for Your Baked Goods

You can’t go wrong when it comes to adding butter and cream to your cakes and even red velvet cake. However, some buttercreams are better suited for your needs than others.

German buttercream is light-flavored with a wonderful aroma. If you’re searching for something lighter, this is the frosting to go with. This buttercream, on the other hand, might be difficult to create, but it’s well worth the effort.

The texture and flavor of Swiss buttercream is lighter than that of American buttercream. Although this frosting takes some practice to perfect, you’ll be disappointed if you ever give up. In comparison with other butters, Swiss buttercream stands up well in the heat.

The sugar syrup present in the Italian buttercream makes it light, fluffy and highly durable. It makes a wonderful cake filling and is simple to prepare.