Red velvet is like an expensive version of a regular cake. It is soft, creamy and it has a distinct chocolate flavor.

Despite its popularity, many people still have no idea what red velvet really is. Many assumed that it was just another chocolate cake with red food coloring.

No. Red velvet and chocolate cake are very different types of cake. Despite the fact that both of these cakes contain cocoa, there are a few factors that make these two cakes distinctly different from each other. 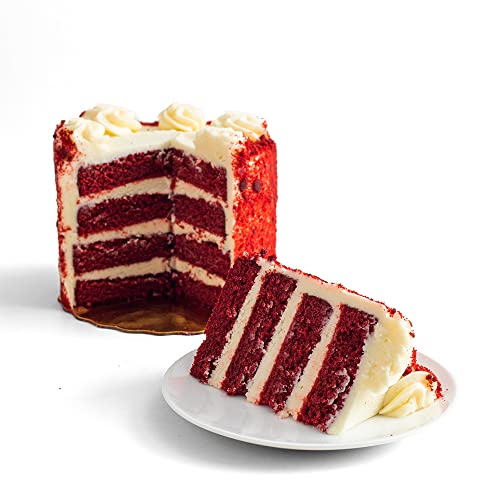 What is Red Velvet Cake?

Red velvet cake is a sort of deep dark chocolate-flavored sponge cake that has been dyed red. It’s usually covered with a white icing made with cream cheese. This cake has a soft, moist, and velvety crumb owing to its dense and soft texture.

What is Chocolate Cake?

A chocolate cake is a cake made predominantly of chocolate or cocoa. Chocolate lava cake, chocolate fudge cake, and chocolate truffle cake are just a few examples of chocolate cakes. The methods used to prepare them affect the distinctions between them.

Chocolate cakes may be prepared in a variety of ways, each with its own set of ingredients. Different countries, on the other hand, may have different recipes for chocolate cakes. In Germany, Sachertorte is a typical recipe, whereas gâteau au chocolat is a popular choice in France.

Flavor, ingredients and texture are the key difference that makes these two cakes different from each other.

First, red velvet has a bright crimson red color because of its red food coloring while melted chocolate or cocoa powder is behind the color of chocolate cake. Then there’s a small amount of cocoa powder and butter in the red velvet cake while egg whites are added generously in chocolate to give it a cloud-like lightness.

As for the texture, added cocoa powder in the flour and acidic ingredients in the batter are behind the reason why red velvet cake is moist. The texture of chocolate cake depends on the type of cake you are preparing.

Next, is the taste, buttermilk and vinegar used in the recipe contribute acidic taste to red velvet. You can taste the chocolate in red velvet because of the cocoa powder added to it.

Of course, chocolate cake on the other hand is sweet or has a strong chocolate flavor, depending on the type of cake and the amount of cocoa added.

No. Red velvet has a distinct texture with fine crumbs and a tangy taste because of the  cream cheese frosting. These things can’t be found in the chocolate cake. Many people considered red velvet cake as chocolate because they can taste the cocoa present to it.

Why Did My Red Velvet Cake Turn Brown?

Browning happens naturally because of the chemical reaction between amino acids and sugar.

The browning usually happens when you do not put enough red food coloring in the batter. Another possible reason is you’ve burnt your cake if the browning comes with a smell.

Why Is Red Velvet Cake Expensive?

Red velvet is not really more costly than the other cakes. The red food coloring the baker used and the cream cheese used for the frosting might make this cake more expensive.

Why Does My Red Velvet Cake Taste Bitter?

Another possibility is the food coloring you’re using. A significant amount of red food dye is required to achieve a bright crimson color. Although food coloring is designed to be as flavorless as possible, some types do have a somewhat bitter taste, especially when used in high quantities.

Find out the different sizes of sheet cake…

What is a Half Sheet Cake?

How Big Is A Quarter Sheet Cake?

Where Does Red Velvet Cake Come From?

Prior to the 1920s, red velvet cake was considerably darker in hue than it is today. A chemical reaction occurred naturally to create a richer crimson tone naturally.

Adams Extract of course wanted to sell more food coloring in the 1920s, and they created a red food color recipe that significantly exaggerated the color.